A Presbyterian Pastor on Neo-Victoriana and American Faith

In the Course of composing at the CREDO Conference in Roslyn, VA, I came across a rather remarkable Revelation.

A Portion of my Youth was misspent in that possibly heathenous pursuit of Dungeons and Dragons, a Role Playing Game of a fantasy Theme. Many happy Hours I whiled away in collaborative Storytelling, taking the part of an Elf or Dwarf or Gnome, a Fighter or a Wizard or a Druid.

My favorite Class to play, however, surprising No One, was the Cleric – that Channeler of the Power of the Gods, their Representative among the mortal Races. For Reasons that would become clear subsequently, I am very attracted to the Concept of the Figure of religious Authority. I identify with such Characters – they carry deep Meaning and Weight for me.

Now that I am, in fact, a Cleric of the American Church of Scotland, I had become disconnected from a Fact which would have served me well in my Ministry.

According to the Game Rules for the Third Edition of Dungeons and Dragons, in order to cast Spells, a Cleric must spend a Minimum of one continuous Hour in study or prayer each Day. Other Powers and Skills remain in Play. but a Cleric’s most powerful Abilities require an Hour’s Communion with their chosen Deity.

In discerning new Practices for my Life, I have chosen to take on this Burden. If I am to do pastoral Work, I must spend at least one Hour that day in Study, Prayer, or Meditation. I can commit to other Duties, those of Home or Family, but my Employ as a Pastor demands a single Hour of my Attention to God – or there is no Spell that I can cast.

A large Burden – but one I am overjoyed to be taking on. 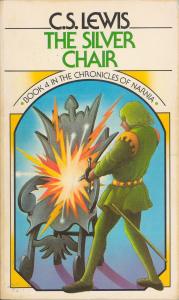 The penultimate Moment of the rising Action of Clive Staples Lewis’ The Silver Chair relies on the eponymous Seat. A mysterious Prince explains to the Protagonists that his mental Health requires the nightly Use of an enchanted Throne. Each Evening, the Prince’s Attendants appear, and secure him into the Cathedra. For a single Hour, he raves in stark Insanity, dangerous and violent, as he relates it. The Queen of that Place has magicked that Seat so that it helps this Prince to maintain his Sanity over the remainder of the day. Twenty three Hours of the Day his Faculties are in Order – for a single Hour, he is overtaken by the Spirit.

The Prince invites our Heroes to observe this unclean Hour, to stay hidden and watch as he rants in abject Lunacy. They stay – they watch. The mad Prince claims from the Silver Chair that only at this Hour is he in his right Mind – it is the Chair that binds him, traps him in a Prison of his own Mind the greater Part of the Day. One hour he has of Clarity, and the rest of his Time is shrouded in Darkness.

So, indeed, it proves. The Chair is the Source of the Enchantment that the Queen (read: Witch) has laid upon the Prince, the rightful Heir of the Throne of Narnia.

I write all this to say that, for my own Experience, Depression often feels as though I am that Prince. Much of my Day, I am lucid and clear. I am operative – as I told my Physician when I embarked on the Course of Anti Depressant Medications, I hoped that they would make me functional, and they have. I have recovered my Mind sufficiently to present as Working, to seek new Employment, to spend Time with Friends and Family.

And yet…there comes an Hour, late in the Night, often as I am taking my evening Ablutions. The Light is gone. A Peace steals down the Stairs, a Centering. I find, of a sudden, that a Yawn transforms into a Sob, and I am weeping in the Dark. All that I have failed to do, all those broken Dreams, shattered Promises, they press upon my Chest, and I am undone.

To this Day, to this Hour, I do not know, though, which is which. Am I mad at that accursed Hour? Or is that my moment of Sanity in each Day? Am I bound by ancient Sorcery to grin and salute and be gracious, while all the while some Part of me is screaming? Or is that passing Madness a Symptom, a Weight that presses on me now, but will lift again?

To be fair to all those who love me best, I am doing better. My days are less fraught. I feel less perilous, less like I stand on a Precipice of Madness. These wearying Troughs weaken – my Peaks begin to resemble an ordinary day.

Still I wonder. Which is the mad Prince? And which of us is Sane?